This autumn, Anne-Marie Visser decided to share her photo album and a few memories of her mother with Getuigen & Tijdgenoten (Witnesses & Contemporaries). In this blog post, she describes what it is like to receive certain information and not know some of the answers.

Years ago, I found a small green suede diary for the year 1946 in between the few papers that my mother had left to me. The only entry for the month of April was the word “Basra”. Similarly, only half a page of the baby book that she had started in December contained writing. The words amounted to a diagnostic report that I had been born prematurely with asphyxia and was rather blue. She was a nurse, after all, and writing things down was not in the family mentality. Thinking was something that you did in your head.

In the course of 1945 [35 years old and single but with a lot of professional experience and qualifications] she had signed a contract with the Netherlands Red Cross to be posted to Indonesia, where she would work as a nurse at Prinses Margriet, a Red Cross children’s hospital on Palmenlaan [now Jalan Suwirjo] in Jakarta. She had worked in Red Cross hospitals before the war. The “Basra” entry [the name of the city in Iraq] referred to a delay in the trip. The DC-3 aircraft was affected by technical problems in the desert and had to be flown back to Cairo/Heliopolis for repairs. It is there that my mother met my father. He had been stationed in Cairo as a civilian pilot since the 1930s and, at the outbreak of WWII, was called up by the RAF to serve in North Africa as a group captain. Military and civilian activities were still intertwined shortly after the war. My mother, who realised that she would lose her job if she got married, remained unmarried and continued to Batavia to work at Prinses Margriet. I was born in December 1946. With the help of a KPM employee, she tried in vain to contact Cairo to report my birth.

I remember that one of the few things that my mother – with a rather pronounced sense of justice – later said about that period was, “If I had known about the political situation at the time and that the Indonesians were so opposed to us, I never would have come.” My grandfather, who was an active member of the Vrijzinnige Democratische Bond [VDB; Free-Thinking Democratic League, a progressive liberal political party] shared that view. It was even more strongly supported by Professor Jaap de Haas, at the time a paediatrician at the Tjikini hospital and, as a communist, very active together with, among others, Professor Wertheim for the Netherlands Red Cross in the 1945-1946 period of transition from a British to a Dutch military presence.

In other words, there are relatively few stories for what was a very eventful period for my mother. We returned in November 1949 on the Indrapoera of Rotterdamsche Lloyd. Many of the photographs that I have are thanks to Leo Staal, who was working as a cartographic photographer for the Dutch air force and who married a good colleague of my mother, Netty Pasiak from Menado, during that period. When he was on leave in Jakarta, he photographed the hospital compound, the staff and patients, the [non-Dutch] children of the staff, and the kokkies and baboes. A birthday card dated December 1947 provides the names of most of the employees: Gan Liang Lie, Hetty Eman, Oen Swan Nio, Sarinah, Emmy Smith, Nortie Ong, Elisabeth Wallan, M. Lans, Sister J. Suurdeeg, Rasminah, Sister Meijer, B. Otterspoor, J. Tillmans, F.E. Hartsteen, Soenirah [kokkie], Enna, Bessie, Oedjoe. It shows how small the nursing staff of the outpatient clinic and baby clinic was. This staff could not have done without the support of doctors of Koningin Emma hospital in Tjikini.

I of course remember my baboe – Tante Dien [Dientje Bekker], who had more control over me than my own mother did. Photographs suggest that she came from the eastern Indonesian islands. I realise only now that baboes must have been in a very precarious position back then: working for Dutch people at a time when nationalism was becoming increasingly militant. But everyone had the relative protection of the hospital compound and worked for the people in the clinic or in the villages. The faces in the [official] farewell photograph taken in the autumn of 1949 – Dien, kokkie [Javanese] and I – do not bring cheer. They evoke tears of sorrow rather than joy. Intuitively, we knew that we would never see each other again. 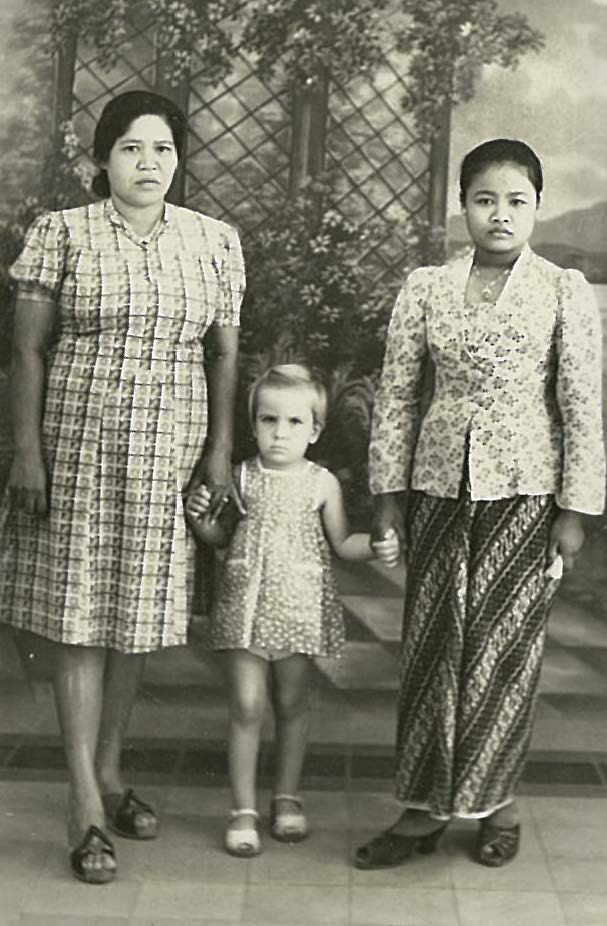